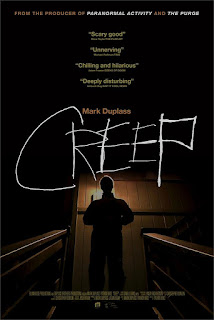 I recently watched the trailer for the upcoming film written and starring Mark Duplass (Safety Not Guaranteed (2012)) and Patrick Brice (in his first feature as director/writer/actor) entitled Creep (2015). The title says it all.

When a videographer answers an ad to chronicle an eccentric, terminally ill man’s final days for his unborn son, the cameraman soon finds his new employer may have more sinister motives.

Found footage has has it’s ups and downs. but in the right hands even the most hardened of critics can find some interesting uses for the genre. With the likes of Mark Duplass behind the film we might just get lucky. Have a look for yourself.