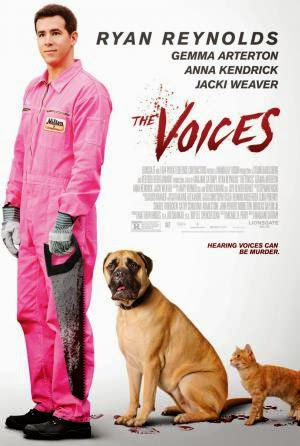 You know, I hear a lot of smack being talked about Ryan Reynolds from time to time, all because of that abominable Green Lantern (2011) and whatever the hell the X-Men Origins: Wolverine (2009) movie was. This poor bastard has had to take all kinds of abuse. Look, nobody tries to make a bad film. He just showed up to what he thought was going to be a bad ass acting gig and was met with poor scripts plus bad direction. O.K. Yes, he did do a few other stinkers, but what actor doesn't have a run of bad movies every now and again. (*cough* Depp *cough*! I kid. My man has a comeback on deck.) Let's face it, even in badly written comedies, R.R. makes the best of it.

With that said, I just watched a trailer for The Voices (2015). I gotta say, it looks promising. (Don't let me down, Reynolds. I stuck up for you.) Think American Psycho (2000) meets Forrest Gump (1994). Hopefully, this isn't the work of a clever trailer editor. Give it watch, keep an open mind, and judge for yourself. I still think you'll be the bomb in Deadpool, Ryan! (Please send all hate mail to Mockfilmsblog@gmail.com)