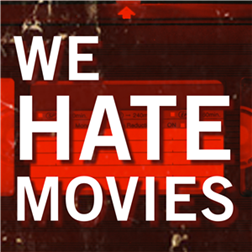 It's amazing to think that we live in a world where terrible, poorly made, B (though more times than not, Hollywood) movies have reached an almost high art status with the movie going populace. Gatherings are dedicated to watching a film, not for it's brilliance but for it's complete and utter incompetence. Endearing ourselves to them, we view reel after dreadful reel, while feeling some amount of pity. It's like going to you're child's dance recital, you know it's awful but they're trying so hard (it's sweet, really). But all the while, tearing the film to shreds for it's sheer crappiness. It's a vicious cycle. Yet, we laugh.

With that, I give you the We Hate Movies Podcast (www.whmpodcast.com). Hosted by Andrew Jupin @jupin, Erik Szyszka @EricSzyszka, Steven Sajdak @stephensajdak, and Chris Cabin @Crabin, the WHM Podcast is not to be missed. In their own words "The guys at WHM are members of Private Cabin, a comedy arts collective based out of New York City. They are comedians, writers, critics, and guys who thought watching movies as a college education wasn't a waste of money." It never is, gentlemen.

When you listen to these guys it feels like you are in your buddies apartment waxing silly about some dumb shit you just watched. And that is a compliment. I remember sitting around for hours with my friends after a bad movie, just trying to figure out where it all went so horribly wrong (with the film, of course). What makes the listen even better is that their knowledge of the subject is top notch. Yeah, I said it, top notch.

I discovered We Hate Movies while dicking around on iTunes one day looking for a movie themed podcast and a month later I had listened to nearly all the available episodes (I need podcasts at work or I just might snap). They structure the show like a Mad Libs and Cliffs Notes mashup of the film from start to finish, peppering in funny comments throughout. Wilfred Brimley and Jesse Ventura are forever engrained in my memory thanks to them (you want to know why? Just listen to the show, Gotdammot!). Their roundtable discussion style leads to some of the funniest bits as they play hilariously off of one another, often times creating better movies in the process.

Bottom line, you will have fun with this one. You don't even have to watch the films to enjoy the show, but it helps. Give 'em a listen. What else you doing at work?
Posted by Adam Mock at 7:41 PM