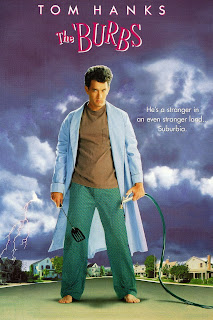 Alright kids, time to jump into the Wayback Machine and watch a blast from the past. We are going back to a time before Tom Hanks was only seen as Oscar gold and wasn't afraid to go for the gut laugh. If you don't know of this time that I speak then ask your dad and watch this weeks slice of late eighties fun called The 'Burbs. This film is reminiscent of so many films of that time. Weird, off the wall flicks that seem like a stoner fantasy but for some reason, the kismet was there and they work. They shouldn't, but they do. 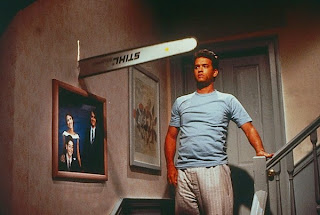 Driected by Joe Dante (Oh, you know we are going to visit the Gremlins, both 1 and 2, at a later date), The 'Burbs takes all of the old tropes of nosy neighbors and builds a slapstick horror around it. Ray Peterson (Hanks) is off from work and becomes obsessed with the strange new neighbors, the Klopecks, with a fair amount of goading from his friends (played hilariously by Rick Ducommun and Mock Films Blog alum Bruce Dern). With little or nothing to do with their free time, the three buddies spy on the eccentric activities of the new residents, like digging up their own yard in the dead of night or the odd noises emanating from their basement. As the strange behavior continues next door, one of the members of the block disappears mysteriously, adding to the speculation from Ray and his cohorts that the Klopecks may be a family of serial killers. What follows is a well crafted, keep you guessing mystery which brings genuine laughs to the audience. 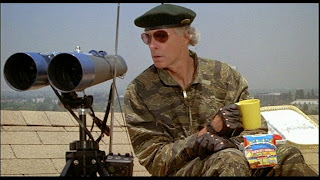 I will admit that I had not watch this film in a couple of years and wanted to see it with fresh eyes in hopes that it holds up. Glad to tell you, it does. Hanks is amazing. One forgets that he cut his teeth in comedy and has a gift for physical gags and pinpoint timing. Carrie Fisher, Bruce Dern and even Cory Feldman all have moments that will keep you laughing, despite the dark subject matter. The jokes are sharp and everyone gets a chance to swim in the comedy pool. 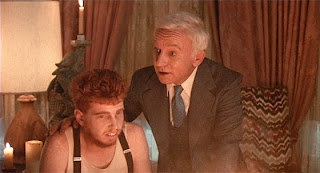 I'm recommending The 'Burbs, if only because we don't get treated to out of the box style films as often these days. It was like the studio said, "Here take some cash and do what you want. We trust you." And I'm happy they did because I miss these strange little flicks of yesteryear. I may just have to give Joe Versus The Volcano (1990) another watch. Oh, wait. Another film that Tom Hanks is being funny in. See a pattern yet? I miss Tom Hanks making me laugh in places other than Twitter. But alas, I may just have to re-watch Bachelor Party (1984) to get my 'Funny Hanks' fix. But do watch The 'Burbs, it's amazing. Enjoy. 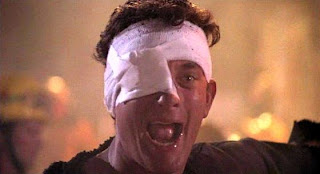