Over the years,  a love/hate relationship has developed with myself and time travel stories. I love the ‘what if’ aspects which drive the narrative, but the science drives the hate train for me where I cannot shut off the loophole detector in my O.C.D strangled brain. And no matter how sound the science, a loophole always slips in. Guaranteed. There’s too many variables to be able to sit back, relax and let the plot unfold. Although, as of late, I have learned to just Zen out and not get too Spock about the logic involved. That said, I give to you the time travel mind-screw, Predestination (2014). 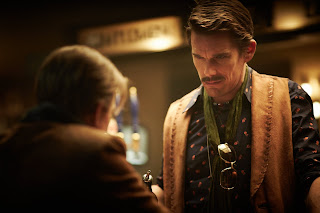 Ethan Hawke plays a temporal agent (a time cop, no relation to Van Damm) who is on the trail of the Fizzle Bomber, a time traveling lunatic who is blowing up different cities throughout time. With this last assignment left, can the agent hope to stop the villain in time? Based on story by Robert A. Hienlien, that’s what the trailer would have you think this film was about. You ain’t heard the half of it. While my significant other and I sat down to watch Predestination, she turned to me around the fifteen minute mark and asked, “Are you sure this is the right movie?” I assured her that it was, although I did have similar doubts that my male pride kept on lock. Not to say that what we were viewing was not entertaining. Actually, we were drawn in by the characters and the story being told. But again, this was not what the trailer had implied. Now this is where being a reviewer gets tough.  If I were to say anything else regarding the ‘real' main plot of this film, it would be an automatic spoiler (spoilers? Not in my house).

The performances are well done all around. As the film played through the changing time periods the film took on an interesting feel. Expositional scenes came across with the verbose wit of a 90’s indie while the Sci-Fi aspects reflect an almost (not to be too meta) Gattaca (1997) style world, yet all built for for a modern day audience. The direction of The Spierig Brothers was engaging while never shoving the plot down your throat. Moderate, yet tense, pacing only helped move the plot while distracting from the clues. 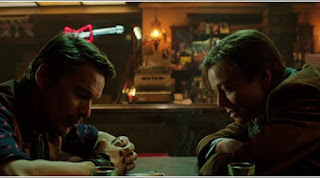 When I began this review, I voiced my opinion on temporal loopholes and Predestination is not getting off Scott free on this one. Not revealing said loopholes, I will merely preface that they exist. The temptation there will be to ruminate and obsess over how this all works, but fight it. Fight it to the end. Then take a deep breath, take in what you watched, decide if you enjoyed it. I implore you to go into this without the nitpick mindset. The ride itself is much more fun that way. If after you have decided your final thoughts on the movie, nitpick all you want. I’m not your therapist. Who knows? I might change my tune after further viewings. But that’s in the future. (see what I did there?) 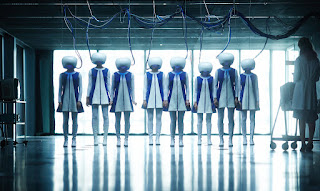 This one is a big recommend. Not expecting what it was going to be, I was quite please with what it became. And at a near perfect runtime of 97 minutes, the movie doesn’t overstay it’s welcome in the least. If anything it will leave you scratching your head. And who doesn’t like a good head scratching.


Because I hyped the trailer so much here’s a sneak peek: