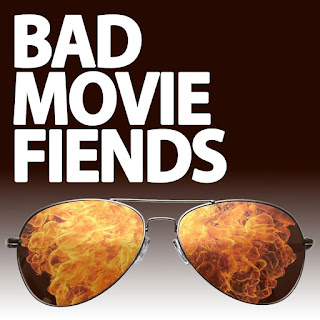 With the countless hours I have spent watching movies throughout my life, one inevitability has remained certain, there is a metric crap ton of poorly made shlock out there for the movie going public to view (and Holy Diver, have I seen a lot). But before we go lighting the torches and hunting down these blights on cinematic history, people should take a step back and try to find the good in even the most unpolishable of terds. In this chapter of Pods On Film, the M.F.B. is happy to report that we have found four such men to embark on this intrepid task. They are the guys behind The Bad Movie Fiends Podcast bmfcast.com. As brazen as their motto,“One star? We’re in!,” these viewers of video past sit through a litany of terrible films in order to prove that there’s nothing wrong with enjoying a bad movie (or tearing it to shreds).

Harlo, Maki, Chuck, and B.J. sit down and watch a so-called 'Bad Movie.' Then they discuss and rate said movie on a sliding scale: 1 to 5 'Jox' after Robot Jox (1990) (which they heavily reference throughout the episodes as one of their favorite flicks) if it's a Good/Bad movie meaning a bad movie that is fun to watch. If it’s a Bad/Bad movie it gets a sliding scale rating of 1 to 5 ‘Bags,' short for ‘Douchebags,’ after the movie Twilight (2008) (‘nuff said).

I found this podcast while hunting for something movie related to listen to. Having a soft spot for 'Cinema d’ Garbage’ I decided to give the boys a listen. Soon, I was bingeing on episodes back to back. Ignoring my daily routine in order to search out and watch these abominations of film and join in on the adventure. Action being their bread and butter for many of the flicks the B.M.F.er’s cover (Hey, we have the same letters. Just noticed), they tend to pepper in the occasional horror, sci-fi, and (God help them) animaaaaytion. That is not a typo, the animation themed episodes are classic and must be pronounced that way (it will all make sense).

The hosts bring that ‘old buddy’ feeling to the listeners with their natural banter which the fellas bandy about with ease. Never forced or fake, they welcome the audience into their world and make you feel like you’re in on the jokes. Split into halves, the show closes with a brief discussion of random movies, shows or general nonsense that’s always entertaining. By the way, audience participation is greatly encouraged. Listeners are asked to voice their opinions, recommend a movie or just leave a message on the Garfield Phone (the number is 1-910-5JOX-BMF. And yes, it’s literally an old school Garfield Phone). There is not much else I can say about the Bad Movie Fiends other than to get your loose cannon ass over to their site and check 'em out for yourself. Crash and burn! (like I said, it will all make sense) M.F.B. out!