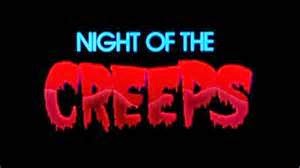 I sat long and hard these past few days trying to come up with a gimmicky angle that could boost readership by at least a couple dozen. But all I could muster up was a play on the whole Throwback Thursday phenom that the internets has grown to love so dear. It's a new twist on an old fav and I have decided called this new blog segment, get ready, Throwback Thursday. Still with me? God bless you.

Now allow me to elaborate. Every Thursday I review an older film from when we where more impressionable (stupid and liked pretty colors) and give it another watch. Look forward to the reviews of such classics as The Goonies (1986) or the other Corey filled romp, The Lost Boys (1987). We will explore more than just Corey laden 80's fair. Don't fret. They were just the first two movies I could muster up. 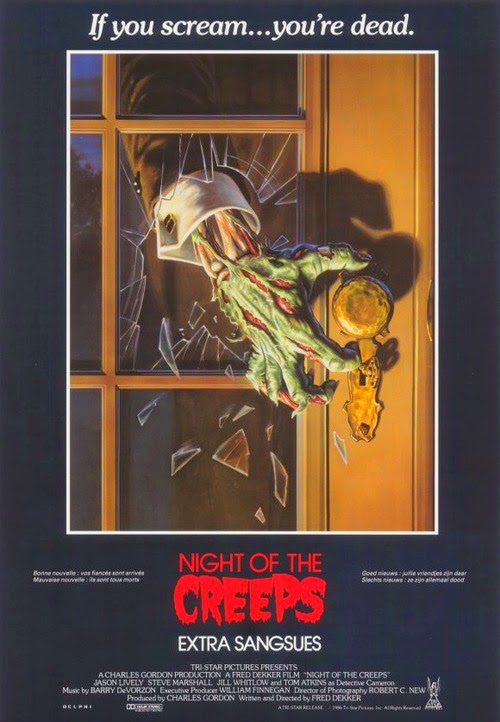 For this, my inaugural edit

ion of Throwback Thursday, I have chosen a rarely watched gem of "schlock for schlock's sake" entitled Night Of The Creeps (1986). Now this particular film had missed my radar until college when one of my roommates, Vinny, decided that we had no choice but to scour the local video stores (ask you parents, kids) and find this almost unknown piece of 80's gold. After a long, exhausting search of what had to be at least three rental establishments, we finally hit pay dirt. There on the dusty shelf laid in wait, a copy of my friend's beloved tongue-in-cheek horror classic in all of its VHS glory.

The portrait style box art of a corpse hand committing a B and E beaconed us to understand the obsession that our friend had for this flick that neither I, nor my other college buddy Paul, had ever heard of. Given that Vin had never steered us wrong before, we took a journey into this world of 'alien bio weapons in the form of slugs that turn people into a mindless zombies when taken orally.' Oh yeah, and it stars Jason Lively aka Rusty Griswald (European Vacation 1986) aka Blake Lively's brother in a tour de force performance as the hero of this picture, Chris. Strap in kids. And be warned. We will be riding through SPOILER COUNRTY. 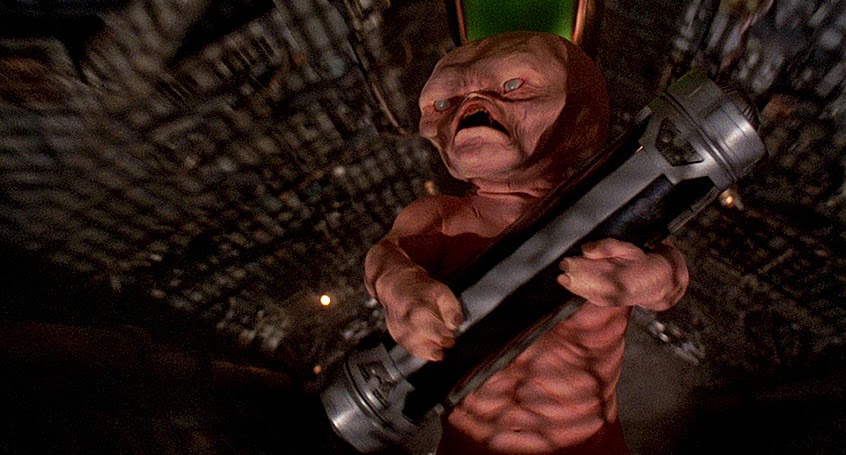 Cut to the black and white Movie B plot, where a couple of All-American college youths go for a ride to Make Out Point. The two lovebirds are interrupted by a police officer who used to date the girl. Warning them to head home where it would be safe. Safe from what you might ask? Oh, did I forget to mention that in Movie C there is an axe wielding escaped mental patient on the prowl looking for young lovers to slaughter. 'Cause that's happening as well. What can you make of all this? Nothing yet. But I promise, it will all make sense at the end of Movie D. And yes,Virginia, there is a Movie D. 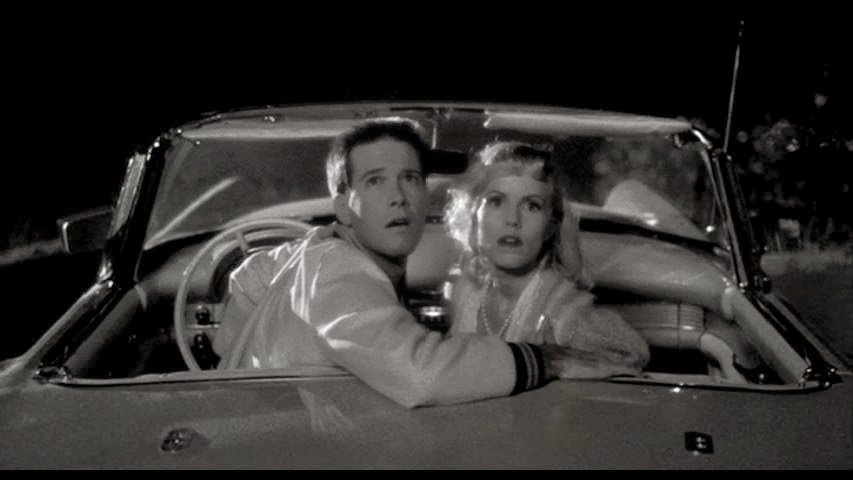 The cop leaves just as the cylinder crash lands near by. (Insert Movie A into Movie B) So, college guy decides to go find it, leaving his best gal all alone and vulnerable to the CRAZY MENTAL PATIENT. (Join Movie B to Movie C using screws provided) It is at this point that the young man is infected by an alien slug that has escaped the cylinder and  wiggled into his mouth. The cop comes back and shoots the mental patient, but not before the girl has been bludgeoned by an axe. I know, crazy right? This gem goes together like IKEA instructions.

Jump ahead to 1986. (Movie D, thought I forgot, huh?) Hopeless college dorks, Chris and J.C., his handicapped best friend, (Steve Marshal in his feature film debut) are convinced to pull a prank by the most powerful, not to mention, blondest fraternity on campus. All they have to do is leave a cadaver from the medical lab on the doorstep of the rival frat and they are in. What could go wrong?

This little prank leads them to thawing out a man frozen in a cryotube. And the man in question is none other than, wait for it, the guy who parked at (Da da daaaaa) Make Out Point and got more than a tongue in his mouth. Now that, my friends, is how you bring a multi-plot-lined film full circle. Now chock full of slug monsters ready to unleash their fury on this small college town.

The cop from the 50's is now a grizzled, chain smoking, mess of a police detective who takes absolutely no shit from anyone, played by Tom Atkins (Escape From New York 1981 and Lethal Weapon 1987). So here we go bringing Movie B to Movie D, you get the picture by now. Oh, did I also forget the love interest, Jill (Jill Whitlow of Porky's 1982), who dumps the Head Frat Guy for Chris because he throws Chris' handicapped sidekick to the ground for screwing up the prank. Not cool, man.

Alright, let's jump ahead and just leave it on this note. Blonde zombie frat guys attack a sorority house, a flamethrower comes into play, one liners by the truckload. There is a lot going on. A lotta fun, that is;). Basically, a Sam Raimi wet dream. Which is who this movie is for, B movie lovers who like extra cheese. Ain't nothing wrong with that. 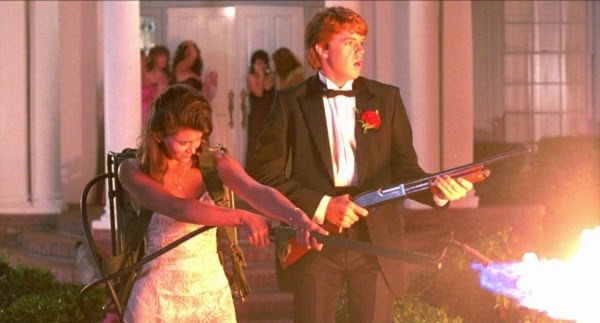 This ball of craziness may have inspired James Gunn to make Slither (2006). Another review for another day, but I'll give you a hint... it's pretty great. So with all the things one would look for in a schlocky 80's romp, the mix of crazy sci fi and horror with a heaping helping of corny jokes, what did I take away from the rematch of Night Of The Creeps? I loved it. Can't you tell? Is it for everyone? No. Is it worth a try? Most definitely.

P.S. There are two different endings to this film, depending on how you acquire the flick. The Netflix streaming version has the better of the two in my opinion. I won't ruin them but watch both and judge for yourself. You won't be disappointed. Or maybe you will. That's life. 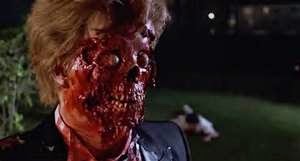 Well, thanks for joining me on this, the inaugural entry for Throwback Thursday. If you have any suggestions for films you loved as a kid and want to see if they hold up, then drop me a note in the comments section or at the email section mockfilmsblog@gmail.com. And if you can think of a more original name for this weekly segment, I'm open to suggestions. 'Cause I'm lazy. Very lazy.