When money gets tight how far are you willing to go for some quick cash? A new father faced with eviction and the sudden loss of his job finds out the hard way in the intensity dark comedy Cheap Thrills (2013), directed by E.L. Katz and written by David Chirchirillo and Trent Haaga. Shot in only twelve days, Cheap Thrills delivers the punches early for its main character Craig, played with a heavy sense of stoic inner turmoil by Pat Healy. The viewer is drawn quickly into Craig's situation, laying his woes before them in the first few scenes, leaving him plenty of time to be dragged along into the true depravity the film has in store.

Deciding to grab a drink before breaking the slew of bad news to his wife, Craig is reunited with Vince (played intimidatingly well by Ethan Embry), a friend from high school who makes a living in collections, serving as the free spirited Yin to Craig's dower Yang.

Enter Colin and Violet (David Koechner and Sara Paxton), newlyweds out on the town in search of some laughs in honor of Violet's birthday. What follows is a series of seemingly innocent dares proposed by the happy couple to their new friends. Finish a shot first, win fifty bucks. Get a girl to smack you in the face first, cha-ching. But after a bet gone wrong at the local strip club, the gang decides to take the party to the couple's abode. What follows is a game of cat and mouse as the dares and the stakes grow ever larger. Seeing this as an opportunity to get out of their fiscal situations, Craig and Vince decide to play along, but at how great a risk? 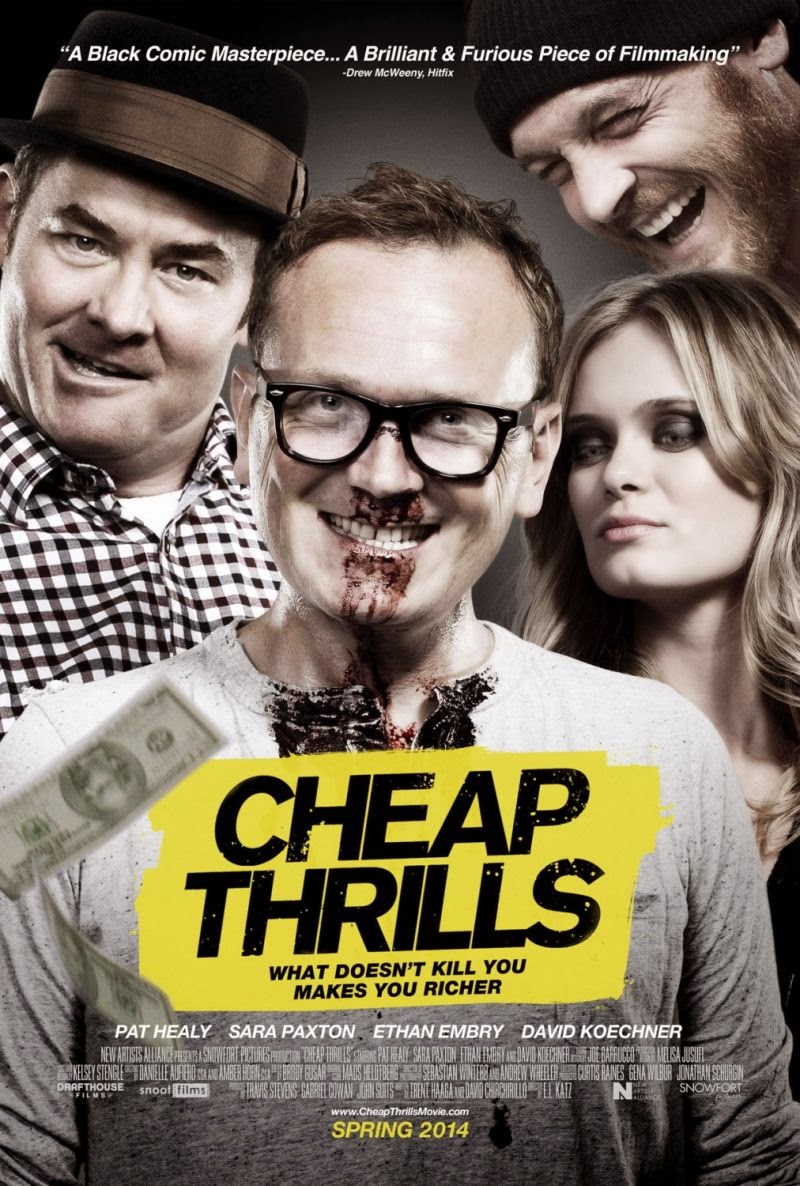 Bringing a heavy touch of realism into this already grey world with the aid of tight shots and handheld camera work, a claustrophobic element helps to broaden the feeling of dread Craig and Vince face throughout the feature. Unyelding in how twisted the dares become, the writers never give the audience a second to figure out where the story will take them. Koechner, with his charismatic approach to the character of Colin, draws you in with charm and salesmanship, while the beautiful Paxton keeps you guessing with her ambivalent tone and delivery, traits they don't waver far from throughout the piece.

Not for the squeamish, this dark (not putting it lightly) comedy delivers an emotional gut punch from beginning to end. Unrelenting and unapologetic, Cheap Thrills will have a special place in the realm of cringe worthy fair that will keep you on edge well after the credits roll. Get ready to question some life choices, or just sit back and enjoy the ride.
Posted by Adam Mock at 7:41 PM