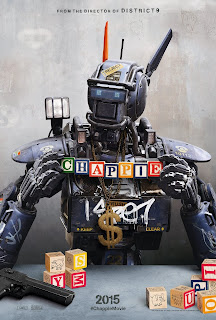 Chappie. Chappie, Chappie, Chappie. What to say about Chappie? I’ve been trying to form an opinion since watching the film and so far I’m more up than down (despite it’s rough go at the box office and poor critic response). Oh, how rude of me, for those of out there wondering what in the heck is a Chappie, here’s a trailer: http://www.mockfilmsblog.com/2014/11/chappie-2015.html. 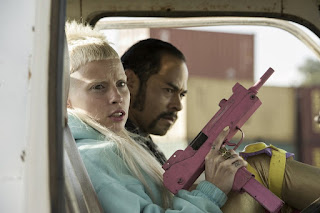 Director Neill Blomkamp’s (District 9 (2009)) latest, tells the story of a robotics genius Deon (Patel), who has revolutionized the police force of South Africa with the creation of robot officers. On the verge of a bigger breakthrough in Artificial Intelligence tech, Deon steals a bot ready for the junk heap, to test out the new software. Enter a group of hooligans who have bigger plans of using the robot (affectionally named Chappie) in a robbery. Finding that the robot’s personality is that of a developing child, Chappie is torn between what is right and wrong when the conflicting influences of his creator and his captors begin to contradict one another. 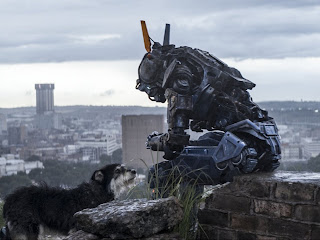 This review is a weird one. Let’s start with the easy part first, then shall we, the special effects. The design of Chappie was extremely believable. Played in Mo-Cap by Sharlto Copley (a staple of Blomkamps acting crop), Chappie felt real. His movements, lighting, reactions (and hilarious imitations of street slag) all came across as there in the room with the other actors. Something that could have further driven people to dislike this picture if not done correctly. The story (although seen in other iterations before) is well imagined and executed sharply. You feel for Chappie the way you would a scared  and confused child. Blomkamp knows just the right strings to pull on the creatures he envisions and never gets too outlandish or cartoony. Now, not to go too far into spoiler country, I will share one waring, the plot does a slight rope-a-dope towards the end that will either make or break your opinion on the film (that is all). 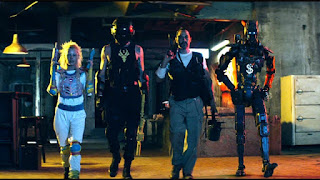 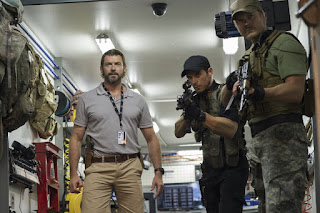 The casting was a tough pill to swallow at first (and one of the louder complaints by many). Casting non-actors (musicians, in fact) as the lead gang members was tricky. Personally, I’ve seen worse acting in other flicks where funky street thugs are concerned, but these two can grow on you (kinda). And for those whining about the accents being hard to understand, we said the same thing about Trainspotting (1996) at the time and we got over it (put on the subtitles. Reading is fundamental). And finally, if you've ever wanted to see Hugh Jackman really go big, in this, he could make Pacino blush. His turn as the heel made the whole watch that much better. Jackman goes berserker towards the end and is having the time of his life in the process.

As a movie I really enjoyed Chappie. As something to think about, I’m still forming an opinion (almost tripped over a couple plot holes). There are flaws, yes, but there’s so much to like as well. The characters all grown in odd ways winding the story down some interesting paths that I didn’t expect. If you have been on the fence about watching Chappie or never heard of it to begin with, I would give it a recommend. And if you don’t like it, well, at least it had crazy looking robots doing crazy looking robot things. Which is nice.