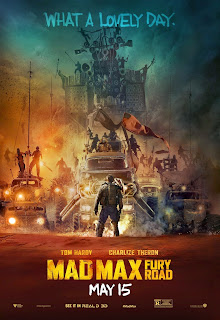 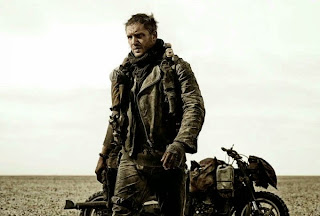 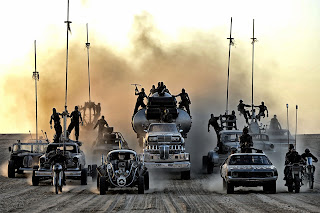 In the post apocalyptic wastelands of the near future, tribes of savage men are ruled by sociopathic tyrants. Gas and water have become the new currency. Control of either means power as vehicles mean life. Max Rockatansky (Tom Hardy), an ex-cop haunted by the loss of his family, wanders the desolate earth struggling to survive. After being captured by a cultish dictator named Immortan Joe (Hugh Keays-Byrne) and his followers, Max is dragged along as the villains chase down Imperator Furiosa (Charlize Theron, who owns this picture), a transport driver who has turned on Immortan Joe. Then, well, it all got a bit blurry from there. This movie is an unrelenting, unapologetic, fireball spewing, big budget work of art. Not usually the words one would use when explaining art, I know, but it will all make sense soon enough.

As I began to write this review for the critically acclaimed Max Max: Fury Road, I was met with a twinge of writer’s block. It had nothing to do with getting the words down.  It came from trying to process the theatrical experience I partook in hours earlier. Just as I felt my mind was made up about this film, the recollection of a small detail or a well written B character added more heat to the five alarm chili that is Fury Road. One would think when most of your movie is a car chase, it might get a tad tiresome. Not with George Miller at the helm. Creator of the original three films, he has not missed a step, rather Miller is flat out sprinting (Fun Fact: He also directed Babe: Pig in the City (1998). Yeah, the adorable pig sequel). To conceive and pull off this level of action at seventy years old; this might be the coolest man alive. 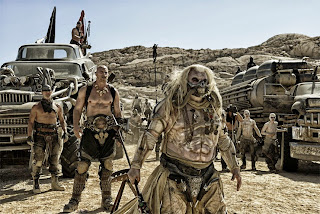 The story seems like a simple one but the world laid before you has a richness which many blockbusters rarely take care to create. Every aspect feels meticulously thought out, down to small details that may have only gotten a moment of screen time. Everything has a back story. The cars are unreal in design, but real as hell on screen. The CGI adds to stunning practical effects mostly when necessary and the film plays around with it’s outlandishness with confidence while using the serious elements as the grounding rods of the story. But when it does gets serious-- boy howdy!  The stunt work is jarringly amazing and the performances intense considering how little dialog was spoken throughout. Even now, I feel no amount of praise can express the brilliant visual acrobatics displayed on screen. This movie will be one to contend with.

Not for everyone, sure, but you know what you’re getting into from scene one. If after that, you haven’t decided to pull over,  you better strap in tight. Mad Max: Fury Road is why cliché movie review quotes were invented.  “Pulse Pounding.” “Mind Blowing.” “Boom-stravaganza!” Yes, it’s all of those things and miles more (Nothing like one more for the "road").