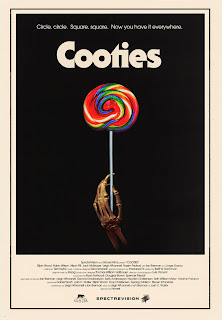 Many moons ago I came across the synopsis for a horror film about zombie children attacking their teachers starring Elijah Wood called Cooties (2015). Sounding like a promising idea for a flick (Clever title, great plot, cool actors, ect.), I decided to watch the trailer, but alas, there was none to be viewed. From this frustration spawned Future Predictions, one of the first segments from the M.F.B. that was not a review (For your perusal: Future Predictions- Cooties (2014) (NR)). Up until, well today, one could only think of this film as an intriguing concept. Now, with the release of the first official trailer, I can continue to blindly speculate if said project will be great or a dud. To be honest, even with the early so-so reviews of Cooties, the movie looks promising. Comedy is there, actors seem all in, and not to mention the copious amounts of monster children who need a serious 'time out.’ The only thing that could have made this cooler would have been if it took place at a Catholic school and the teachers were angry nuns. Penguins vs Zombies (Copyright Mock Films Blog, 2015). Then, who am I, but a lowly film critic (Of sorts). So, without further ado, I give you Cooties (These are the jokes, folks. These are the jokes.).