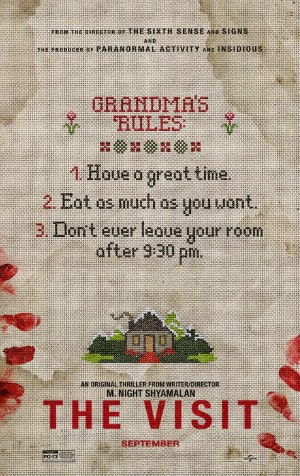 It is with a heavy heart that I have to bring you this tragic news. Someone went ahead and financed another movie by M. Night Shyamalan. Yes, you heard me correctly. The producers of Paranormal Activity (2007) watched his past gems like The Happening (2008), The Last Air Bender (2010), and After Earth (2013) (A.E. still burns a hole in my Netflix queue) and still gave him money. I do feel bad for the guy in some respects. He is the butt of bad movie lists left and right. But to be fair, he did wow us once (in some peoples cases a couple times, just not in mine.). To be honest, up until Air Bender, I really was rooting for him. But there is only so many times one can make the same mistakes over and over again before people lose faith in your work. But I’ll try to be nice. So, before we get all whirled into a tizzy, let’s just take a moment… catch our breath… and give the trailer for The Visit (2015) a watch.

When two kids spend a week at their grandparents house, strange things start to unfold after 9:30 pm. I have to say, if I didn’t know who directed this, I would be all in. But again, his trailers have oft times been better than the main event. Enough Love/Hate speech, decide for yourself. Just remember, he’s hurt us before. When will it end. Guess we’ll wait and see.