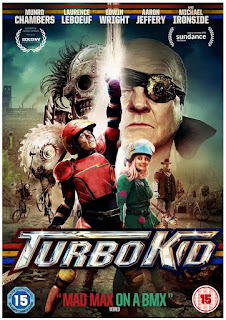 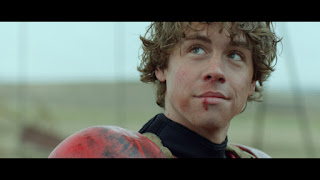 Nostalgia projects have become a hot commodity in today’s filming ventures. With successful crowd funded projects such as Kung Fury bubbling our childhood memories back into our consciousness, it is inevitable that more of these films are going to be made. With that, Turbo Kid seems ripe for this niche genre. 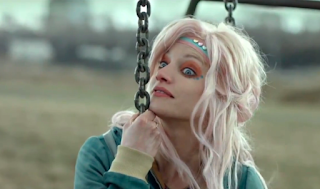 A new indie offering from the Great White North, Turbo Kid takes place in a post-apocalyptic world where strange characters rule the landscape in search of water and supplies. The Kid (played by Munro Chambers) is a teenager who has spent a good deal of his life alone in this barren wasteland. Keeping to himself and scavenging for items to trade, not to mention adding to his collection toys and memorabilia such as View Masters, Turbo Man comics and near fossilized chewing gum. Keeping to himself, he lives in a kid-like mindset until meeting an eccentric pixie-dream girl named Apple (played with a sweet wide-eyed innocence by Laurence Leboeuf). 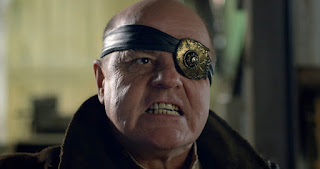 Things seem to be going well for the two until they run-a-foul of Zeus (Micheal Ironside doing what he does best), the leader of a ruthless gang of evil-doers who take joy in processing their victims into drinkable water. Taken by surprise, Apple is kidnapped as Kid is forced to seek refuge in an old aircraft which holds the remains of the actual Turbo Man, the real-life hero of his comics. Dawning his idol’s uniform, as well as his Power Glove Laser Cannon (which turns its victims into a raining mist of goop), Kid goes on to face Zues’ gang and rescue his friend. With the help of a fellow captive, an arm wrestling cowboy named Frederic, the three escape the clutches of Zeus’ gang only to have to face them in a final blood-soaked showdown.

Trying not to be too spoiler heavy, I’ve decided to stop there. The story is the typical heroes’ journey, so I’m not telling you anything new here. Instead, let’s get into the meat and potatoes of this interesting little flick. Presented almost as a kid’s adventure one might see in 80’s Hollywood fair, Turbo Kid takes a few of the more beloved tropes and puts a gory tongue-in-cheek spin on them. Not pulling any punches, this movie isn’t shy about getting bloody with a plethora of practical and digital effects. Don’t be mistaken, this is a nostalgic kid’s flick for the adults. A spoof in many respects, but without being completely overt about it. 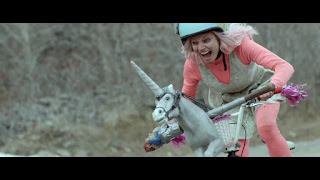 The ideas in this movie are interesting and often amusing. The thought that everyone, including full grown men, are riding bikes in high speed chases is an amusing concept and worked very well to keep the  film more light-hearted. However, for an action vehicle which touts big explosions and bloody fight scenes, I would have enjoyed the fight choreography to have a bit more panache. Slow moving punches and dragged out battles (although done for laughs) hinder this from being a better movie. 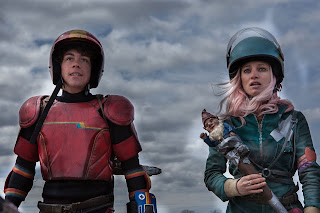 The leads are wonderful, playing off one another with sharp comedic timing and cute banter helping to balancing some of the rough violence which, at times, feels forced and out of place in the often times sweetly sappy narrative. Although, the irony of the differing tones eventually works fin the end. Chambers is great at the titular lead, bringing an every-man levity to the picture. Apple, the tightest written character in the film, is a breath of fresh air whenever on screen. Leboeuf brings a charm and innocents to her which pays off in every scene she graces. Ironside, what more can you say about the man, he plays bad so damn good. Never phoning it in, he seems to be having fun as the role of the heavy.


Clever concept, well-done effects and a talented unknown cast help the film get out of any ruts it may be heading toward. Not a perfect flick, but an oddly fun ride nonetheless. I would give this a recommend to anyone who is able to just go with a premise, no matter how strange. Watch Turbo Kid for yourself and be your own critic. I’m just here to to get you through the wasteland. Enjoy! 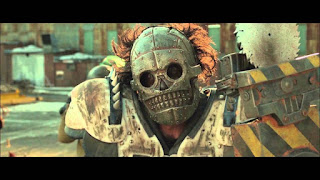