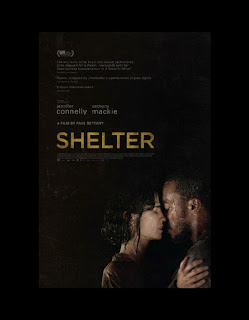 Years ago (If you’d like to know more), I worked on a film called Brother To Brother (2004) as an Art Production Assistant (fancy, huh). Starring in that film was a young man named Anthony Mackie. Now, when one works on a picture, that does not necessarily mean that one get to see the making of every part of said film. While the actors are off doing their job, one might be off building the next set. So, to say I have met the man would be a lie. But to say that every person who spoke of Mackie during the production had nothing but praise for his skill as an actor, that is the truth. Many on set speculating that he would be the next big thing. I for one have had the privilege to see this come to fruition.


Now that the narcissistic rant of the day is out of the way, let’s get back to the matter at hand. Shelter (2014) written and directed by Paul Bettany (yes, Jarvis/The Vision), stars Anthony Mackie and the always engaging Jennifer Connelly in a film, that I am sorry to say, had slipped past my radar. A darker, more serious film for the previous two stars, but the engaging preview can explain in more elegant terms what the film is all about. Enjoy.